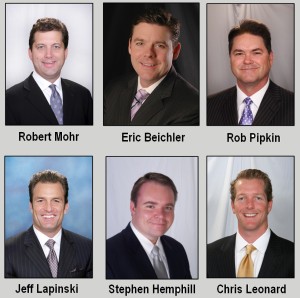 The 2012 Heavy Hitters will be honored at a breakfast at the Dallas Convention Center and featured in a special publication of the Dallas Business Journal on March 30, 2012.

Robert Mohr founded Mohr Partners in 1986 with a single office located in Dallas, TX. Now in its 26th year of operation, the company recently launched its twentieth office in the U.S., with plans to open additional offices throughout North America in 2012. Mohr has overseen the company’s growth in becoming one of the largest U.S. based Corporate Services Real Estate firm in the country.

Rob Pipkin joined Mohr Partners in 1998 and brings over 23 years of experience in commercial real estate representing and consulting corporate, national and local clients in all aspects of their real estate needs. In recognition of his leadership and hard work, he was named Mohr Partners’ Broker of the Year in 2009 and 2011.

Jeff Lapinski joined Mohr Partners 15 years ago and has consistently been among Mohr Partners’ top producing brokers each year. In acknowledgement of his production, leadership and hard work, Lapinski has been named Mohr Partners’ Broker of the Year on multiple occasions, including most recently in 2010.

Stephen Hemphill joined Mohr Partners in 2003 and has brought exceptional value to clients during his tenure. He is known for his ability to quickly assess clients’ needs and offer imaginative solutions using the Mohr Partners business model. In 2010, Hemphill was ranked #5 in the Dallas Business Journal’s Top 35 Brokers Under 35 listing. In recognition of his leadership and hard work, he was named Mohr Partners’ Mentor of the Year in 2006 while serving as a Co-Manager of the Business Development Group Department, and Broker of the Year in 2007.

Chris Leonard joined the company in 2004. During his tenure, he has elevated himself to Account Executive and developed a business that consists of over 17 million square feet of national portfolio real estate under management. He was named as a D CEO Power Broker in 2010 and 2011.

“We are very honored that six individuals in our Dallas office were selected as Heavy Hitters finalists by the Dallas Business Journal,” said Ted Fredericks, President of Mohr Partners. “2011 was a very strong year for us as a company, led by contributions from our brokerage group in Dallas as well as in our many offices throughout the country.”