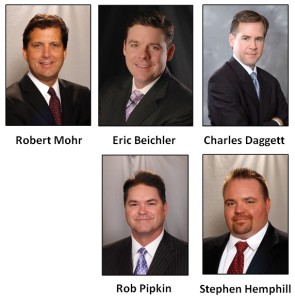 The 2013 D CEO Power Brokers were selected by North Texas commercial real estate firms according to the individuals who generated the most revenue for their companies in 2012.

Robert Mohr founded Mohr Partners in 1986 with a single office located in Dallas, TX. Now in its 27th year of operation, the company recently expanded into Canada with an office in Toronto. Mr. Mohr has overseen the company’s growth in becoming one of the largest U.S. based Corporate Services Real Estate firms in the country.

Eric Beichler joined Mohr Partners 19 years ago and was promoted to Managing Partner in 1998. As a Principal of the firm, he has been instrumental in many areas of the company as it has experienced substantial growth through recruiting, client sourcing and retention. Mr. Beichler was recognized as Mohr Partners’ Broker of the Year in 1997 and 2002, and Partner of the Year in 2005.

Charles Daggett joined Mohr Partners in 1995. He is a recognized leader in the Corporate Real Estate Advisory Services field, with vast experience representing primarily Fortune 500 and Fortune 1000 clients. As a Principal of the firm, he serves on its Executive Management Advisory Board with responsibilities in oversight of the firms’ national offices. Mr. Daggett was recognized as Mohr Partners’ Partner of the Year in 2010.

Rob Pipkin joined Mohr Partners in 1998 and brings over 24 years of experience in commercial real estate representing and consulting
corporate, national and local clients in all aspects of their real estate needs. In recognition of his leadership and hard work, he was named Mohr Partners’ Broker of the Year in 2009, 2011 and 2012.

Stephen Hemphill joined the company over ten years ago. In 2010, Mr. Hemphill was ranked #5 in the Dallas Business Journal’s Top 35
Brokers Under 35 listing. In recognition of his leadership and hard work, he was named Mohr Partners’ Mentor of the Year in 2006 while serving as a Co-Manager of the Business Development Group Department, and Broker of the Year in 2007.

“We are honored by the recognition received by these five individuals in D CEO Magazine,” said Ted Fredericks, President of Mohr Partners. “2012 was a record year for Mohr Partners as we exceeded company revenue projections with 30% growth compared to 2011, and expanded our North America footprint with a new office based in Toronto.”